Showing posts from November, 2012
Show All

At the pub with a time series 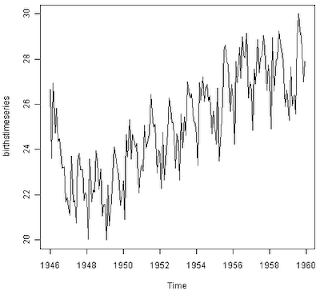 When following the variation of some quantity over time, it is termed a time series.  For example , when plotting the number of births per month in New York city from 1946-1960, there is a peak each summer (seasonability). There is also long-term growth in the number of births each year (a trend). The pilot data below comes from an accelerometer showing the amount of movement produced by an individual over time. This sensor is worn around the neck and produces a data point every second. To keep things interesting, I should mention that the individual wearing this sensor was at the pub for around 2 hours and while there consumed 2 units of alcohol. The rapid spike at the start shows them walking down the stairs to the bar (conveniently located below the School of Psychology). Due to the large number of data points and variation within the data, it is almost impossible to get an idea of what is going on as the evening progresses (if anything!). Although we might predict tha
Post a Comment
Read more
More posts